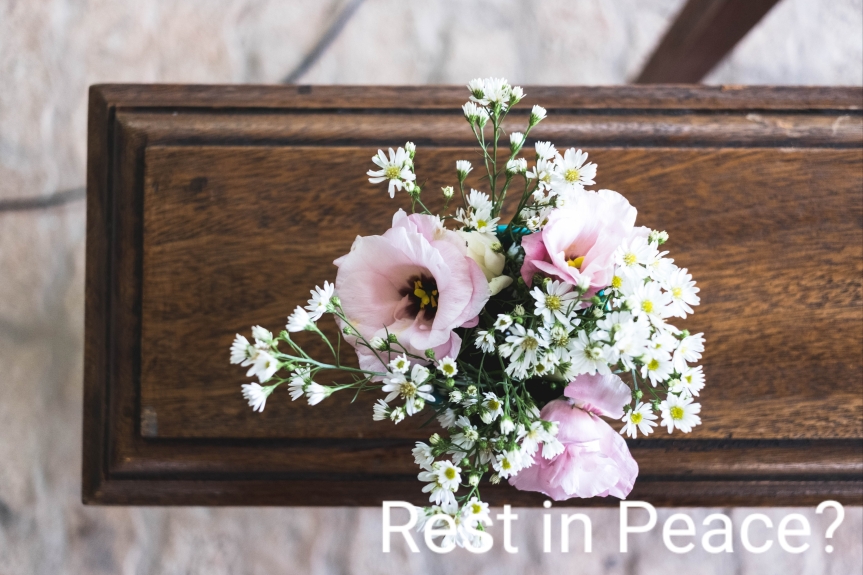 The world’s response to Death
The normal and seemingly loving way to respond when friends or family lose someone is to send this little text RIP, assuring them of peace beyond the grave. This looks harmless and speaks of love and concern. And it’s the best wish the world can come up with when the enemy of life strikes.

Now, I must tread carefully here especially as this will bring sad memories to many and I might seem insensitive to even dare share this here.
I want to state carefully that this is not my intention and I have personally echoed those words before without thinking. What’s worse, most times I don’t even know what to say in this situation.

As a matter of fact I have been putting off writing this post for a while waiting for an opportune time when someone wouldn’t be grieving but I don’t think such a time exists.

The Gospel’s Response
It troubles me that we may be in danger of undermining or even denying the message of the Gospel when we respond this way as Christians. The Bible is clear of what happens when people die;

…27 Just as people are destined to die once, and after that to face judgment, 28 so Christ was sacrificed once to take away the sins of many; and he will appear a second time, not to bear sin, but to bring salvation to those who are waiting for him. Hebrews 9.

Caring for the bereaved as Christians
How then do we care for loved ones, Christian or not when death strikes without denying the truth of the Gospel?
I think the answer is we must be ready to do more than send a 3-word text. The Bible calls us to mourn with those who mourn:

True eternal peace is only for believers

The Bible assures us that those who lived waiting for King Jesus truly rest in peace when they die and we can say this with confidence.

For those who live for King Jesus death is truly great gain as they depart to live with him as Paul states in Philippians:

… 21 For to me, to live is Christ and to die is gain. 22 If I am to go on living in the body, this will mean fruitful labor for me. Yet what shall I choose? I do not know! 23 I am torn between the two: I desire to depart and be with Christ,which is better by far…Philippians 1:21-23:

In reality, death is the best that can happen for a Christian as they go to be with the Lord Jesus.

But what about non-Christians?

Many even within Christian circles will dismiss this saying it’s between them and God and this is true. But the question here is how do we hold true to what God has revealed in his Word?

The justification I hear people use is that we don’t know what happens moments before people die. Indeed, people have turned to Christ and have been saved from his judgment on their death bed.  And there’s not much we can do at that point but pray for them to turn to God before it’s too late.

However, I don’t think we should play games with people’s lives and wait until then to make this prayer. If we truly believe the message of the Gospel then we should be unashamed of the reality of God’s judgment even as we call people to turn to his grace and mercy.

I admit how painful it is to see loved ones reject the very Gospel that can save them from the coming judgment but the answer is not to ignore or deny this truth. It’s to prayerfully urge them not to harden their hearts to the call of the Lord Jesus before it’s too late:

“Today, if you hear his voice,
do not harden your hearts
as you did in the rebellion.”

16 Who were they who heard and rebelled? Were they not all those Moses led out of Egypt? 17 And with whom was he angry for forty years? Was it not with those who sinned, whose bodies perished in the wilderness? 18 And to whom did God swear that they would never enter his rest if not to those who disobeyed? 19 So we see that they were not able to enter, because of their unbelief. Therefore, since the promise of entering his rest still stands, let us be careful that none of you be found to have fallen short of it.